In the 2018 Medscape Survey on Physician Burnout and Depression, over 15,500 physicians were surveyed.  The Medscape survey was aimed at answering some vital questions, such as “What causes physician burnout?” and “What are some ways to fix physician burnout?” The results were interesting, and I think worth discussing.

Today, we will highlight some of the results and how these facts might impact our decisions around burnout at work.

Of the more than 15,500 surveyed, 61% were men and 39% were women.  The survey was collected over a four month period (July to October) and it was sent to both Medscape members and non-member physicians practicing medicine only in the United States.

Interestingly, the percentage of physicians that were burned out was 42% regardless of whether they worked as an employed physician or were self-employed.

What is the prevalence of burnout in each specialty?  Here are the numbers: 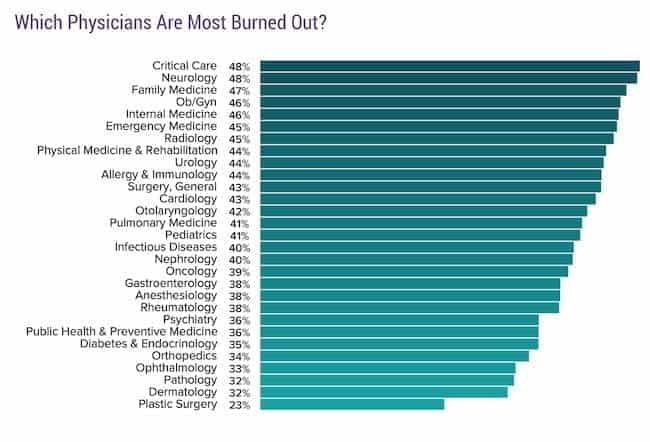 In all, over 26 specialties had a burnout rate of 33% or higher.  In essence, one in three colleagues were burned out.  Some studies have suggested much higher rates.  This went as high as almost one in every two for critical care and neurology.

One finding that surprised me from the prevalence results was how high the numbers were for specialties that are often considered “less stressful” (i.e. family medicine, PM&R, etc).  As we look at the causes of burnout below, it might not be so surprising anymore.

The respondents were asked to determine various big picture etiologies of their depression from several different categories.  These results are below.  It turns out that the number one cause was their job. 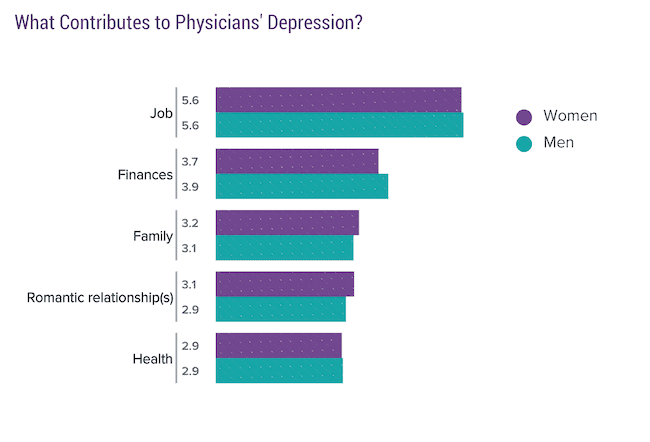 Interestingly, the number 2 cause was finances.

Given that the purpose of this website is to help combat burnout through financial independence, this didn’t surprise me… but it was nice to see the thought validated in a survey.

Causes of Burnout and Ways to Reduce It

Now, this was the most interesting information from the entire study.  Physicians were asked to determine the causes of burnout. Then, they were encouraged to label some ways that burnout/depression might be reduced.

We already determined from the above information that the second leading cause of depression seems to be financial.  That said, when asked about specifics at work that caused or led to burnout this is what the respondents said:

You would think from the top two causes (too much bureaucratic work and spending too much time in the workplace) that the obvious ways to help minimize these problems would be for physicians to ask for secretarial help, scribes to help them chart, and to pursue partial FIRE (to allow more time away from work).

But, that’s not what the people responding to this survey said.

In typical physician fashion, they demanded more pay to compensate for their stress. Apparently, doctors don’t make enough money. So that I avoid putting words in their mouth I’ll show you what they said and then discuss my thoughts below: 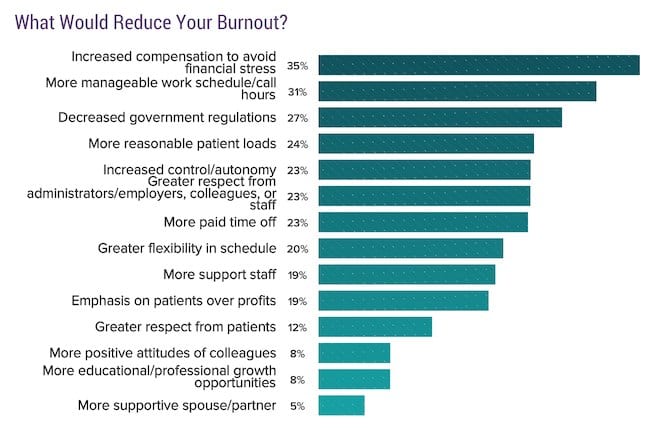 What do you think about the responses?  Over a third of the doctors in this study thought that being paid more would lead to less burnout.  This is despite the causes that listed above where money isn’t mentioned until the fifth cause for burnout.

I think this survey can be broken up into two difference sources of frustration: the big picture (work-life balance) and the little picture (causes of burnout at work).

In the big picture, finances seem to play a large role.  We see this twice.  First in the causes of depression where finances are listed as the number 2 cause only behind the workplace.  This goes to show that finances can be directly linked to depression and burnout.

The solution to this problem isn’t to pay physicians more, but to give them a higher financial literacy coming out of training so that they know what to do with the money that they receive.  Financial Independence can help solve a lot of these problems, if only physicians were taught about this stuff.

What kind of stuff? Well, like the fact that physicians have a spending problem.  When burnout comes raging into the physician life, a lot of people think the answer is to spend money to find the happiness that is missing.  This is like adding water to a grease fire.

Yet, when physicians were asked what could solve the burnout problem, the number one solution provided was to increase their pay.  My gut feeling is that most doctors would not feel this way if they knew how to handle their money.

To be clear, I am not arguing that paying physicians more is a bad idea – I just don’t think it would solve the problem of burnout.

I could have been a doc surveyed with the question “What contributes to physician burnout?”  I would have given similar answers.

The fact is that non-physician tasks have continued to creep into the workplace for doctors.  We have more charting, more electronic billing, more administrative creep, and less time taking care of patients.  Many doctors also do not have work-life balance as they spend too much time at work.  Hospital administrators who refuse to put employees first don’t help either.

These answers make sense. They are definite contributors to burnout.  As physicians, our job is to take really good care of people, to bill them for their care (to keep the doors open), and  – if you are in academia – to teach and to perform research.

Anything that is not inherently involved in those tasks should be supported by work staff who can help contribute to a decreased physician work-load.  Personally, I’ve felt the burn lately and it mostly results from an ever growing “to-do” list that I can’t seem to get done.

Ironically, though, these same doctors filling out this survey said that getting paid more would remedy these problems. How does getting paid decrease meaningless tasks, lessen work demands, or give you more support from administration?

This is a prime example of people who don’t understand The Tale of Two Doctors. They’ve likely financed a life that they cannot afford in an attempt to make them happy.  In other words, it seems like a lot of Dr. Jones’ filled out this survey.

Looking into the prevalence and causes of burnout among physicians is a really important task.  While it seems that we have done a good job of determining causes, we did not do the best job highlighting what the best fixes might be for the problems we face.

In the end, I maintain that teaching financial literacy to medical students, residents, and early career attending physicians will help prevent a lot of the financial causes of burnout.  Also, It will allow these physicians to have a better work-life balance as they approach financial independence and have more options.

What did you think about the survey results?  What was your take away?  Leave some comments below.