The day my professional identity tasted like Humble Pie

I took another bite.  Then, one of our residents came into the break room.  “Hey, where’d you get that sandwich?”

I told him it was doctor’s day and that the CRNA’s bought the attending physicians lunch.

“The resident’s aren’t included, are they?  We aren’t real doctors, right?“

Right then, I realized I made a big mistake by not taking a stand on this one, and not even realizing I should have… I deserved what was coming… my resident read me the riot act.  “You know that not having your professional identity recognized is one of the biggest causes of physician burnout, right...”

Immediately, I. felt. terrible. What I did was wrong, and I didn’t even see it til my resident pointed it out to me. I am glad that he felt comfortable enough to lay into me.  He knows I care about resident wellness and I completely struck out on this one.

I just didn’t think it through.  My privilege silenced any questions I should have had. It wasn’t just a sandwich, it was a failure to protect my resident’s professional identity.

Becoming a physician requires a lot of work.  Four years of undergrad, followed by four years of medical school.  At that point, you are a doctor. Untrained in a specialty; yet still a doctor.

That hard work should be recognized.  Unfortunately, it often isn’t.  Particularly in residency.

The problem is that studies have shown that when young doctors are not recognized as physicians, it contributes to their burnout.  Knowing this isn’t enough, we have to live it by protecting our residents. 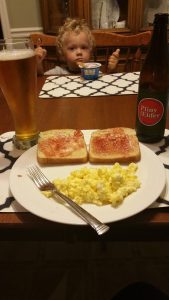 I remember how hard residency was. This was the meal I had after finishing my last 24 hour call shift as a CA-3. Nothing like washing breakfast down with a Pliny the Elder on the East Coast.

Now, don’t let that go to your head.

I don’t want you climbing to the peak of mount stupid. But, you should encourage the professional identity of all those around you, including both your colleagues and yourself.

The same is true for other members of the team.  Recognize them for who they are and what they have accomplished.

… and don’t let your attendings eat sandwiches on “doctor’s day” if they didn’t buy them for the residents, too.

To the Attending Physicians in Academia

It’s our responsibility to protect our residents.  I’ve had other successes on this front, but this day wasn’t that day. I failed on this one.  Plain and simple. To err is human, right?

We expect our residents to receive constructive criticism, and I encourage you to continue to do the same.  After all, there isn’t a person in this world that I cannot learn something from.  I’ve learned this lesson over and over again.

On this day that I ate that sandwich, I learned something from one of our residents who was brave enough to tell their attending that they failed to stand up for them.

While I thought I was just eating a sandwich, I was actually encouraging worsened professional identity for our resident physicians.  I was expecting to eat a sandwich, and my (thoughtful) resident served me humble pie.

Stick up for those around you.  That’s all.

I’d love to hear stories of times where you successfully defended someone in a tough spot.  Have you ever recognized something or someone others didn’t?  Have you ever stood up for the right thing even when it wasn’t popular?  Leave a comment below.