How to Be Better With Money: 5 Lessons from Sports

My wife and I both played college soccer.  She was a four year scholarship winner and starting center-back.  I was a walk-on goal keeper, eventually starting my senior year.   The pre-seasons were grueling with two-a-days that made your body so sore that getting out of bed was a challenge.  Despite feeling like we got run over by a truck, we would admit that we often miss those days.

Because of this shared experience, my wife and I have always loved watching and playing sports.  However, we can’t get through a game without one of the sports broadcasters driving my wife up the wall because of the double entendres they often use.

You know what I am talking about.  When they say things like “they got a lot of penetration on that one.”  That sort of comment results in an immediate face palm next to me on the couch.

Honestly, sports produce some pretty impressive Freudian slips. My all-time favorite double entendre headline in sports was this gem from 2008: 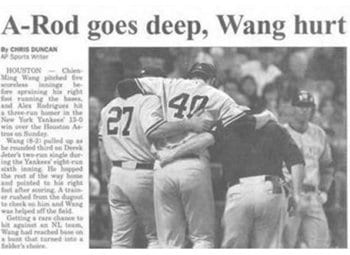 I guess I can’t hate on the author too much.  We’ve all put our foot in our mouth before.

Despite the terrible (and hilarious) things that are said in the sports world, there are also a lot of inspirational thoughts that come from athletics, too.  Here is a recent one from The Beast himself after Seattle lost in the playoffs in what might be Marshawn Lynch’s last game:

“It’s a vulnerable time for a lot of these young dudes, you feel me?” Lynch said. “They don’t be taking care of their chicken right, you feel me? If they was me or I had the opportunity, the opportunity to let them know something, I say, ‘Take care of y’all money because that s— don’t last forever.’ Now I’ve been on the other side of retirement, and it’s good when [you] get over there and you can do what the f— you want to, so I tell y’all right now while y’all in it: Take care of y’all bread so when you’re all done, you go ahead and take care of yourself.

Here are five other famous sports quotes.  Follow along as we discuss how they can be applied to winning the game of personal finance.

The point that Bear Bryant was making is that scoring is great, and it is a lot of fun to watch. Yet, if your defense can’t stop the ball, your team will inevitably lose.  This is the reason it is so important to consider refinancing your student loans and getting rid of them in 3-5 years after you finish training!

Anyone who has played sports has had this experience on an individual level, too. We cannot always control whether the ball is going through the hoop, but we can control how hard we play on defense.

Personal finance is no different.

We can do some things to increase the money coming in, like getting a bonus, changing jobs, creating a side hustle, or asking for a raise.  However, there is only so much of this that we can personally control.

On the other hand – just like playing defense – being frugal is 100% within our control.  We can choose to limit monthly costs (phone bills, utilities, etc), drive an older non-financed car, wait to buy the dream house, and put any additional money we do receive to good use.

A high income may make for a good offense, but frugality wins in the game of personal finance.  After all, if you spend what you make, your income doesn’t matter.

Any long-time reader will know that I love playing golf, particularly with my little girl.  Don’t confuse this with me being good at golf.  Those are very different things.

A famous quote that I often hear on the golf course, which usually comes right after I miss a big putt is the following:

“You drive for show, but putt for dough.”  ~ Bobby Locke

For the non-golfers out there, people love to watch someone hit a great drive from the tee-box. The further it goes, the more spectacular the sight. This is the meaning behind “drive for show.”

Putting, on the other hand, is usually a lot less dramatic.  It’s the simplest stroke in the game, and yet it is often the most pressure-packed.  The size of the moment, the small target, second guessing your reads… it can be tough to keep a steady hand.

If you can’t putt, you will never be good at golf.  And you certainly won’t make money at it.

Similarly, we can get quite fancy in personal finance.  We can talk about investing with a tilt towards certain small and value asset classes, algorithm based investing, tax-loss harvesting, and backdoor Roth IRA’s.  All of these are worth consideration.

Yet, it’s the simple things that help us win the game.

Things like maximizing the distance between our income and spending, spending time in the market instead of timing the market, maxing out our retirement vehicles, and sticking to the plan.  Some might call these the behavioral finance aspects of our money management.

Are these things sexy?  No.  But they are a sure-fire way to find financial success.

Kevin Durant is known for a few things, including his prolific shooting ability (despite being 6′ 9″), being a photographer off the court, and even being a YouTuber.

When it comes to the age old debate of whether hard work or talent are more important, Durant doesn’t mince his words about his favorite quote:

The truth is that when life comes easy for people, they often end up getting passed up by the hard workers that started off in a worse position.

In the world of personal finance, doctors might have a high-income and a status symbol profession, but if we aren’t willing to put the work into doing the important things right – none of that will matter.

I’m looking the medical profession in the eyes on this one:

We need to stop living paycheck to paycheck with the assumption that our talents will always result in a high paying job.  Quit chasing the Dr. Joneses and start working hard to get your financial house in order.  More money will not make you happier.

All that talent and high-income won’t matter if we don’t have a hard work ethic to match it. Despite earning millions of dollars in our career, we will be just like the rest of the people who cannot retire at the age of 60.

Put the hard work in, and win the game.

“Competitive sports are played mainly on a five-and-a-half inch court, the space between your ears.” ~ Bobby Jones

If you want to know the biggest key to both sporting and financial success, this quote sums it up.

Two of the biggest financial mistakes I see people make involve getting advice from the wrong people and in comparing their results/plans to that of others.

The real secret to financial success is in creating a plan that works for YOU and sticking to it.  That plan doesn’t have to be better, worse, or the same as someone else’s plan.

Personal finance is like solitaire – a single player game.  You are not playing your neighbor, co-worker, or friend.  Your job is to get to your goals, not beat other people to theirs.

The more we stick to that five-and-a-half-inch court between our ears, the better off we will be.  Bobby Jones must have known what he was talking about.

If only sticking to the plan and the space between our ears was as easy as that.  Unfortunately, we often need motivation to help us stay disciplined financially.

Tony Dorsett, a hall of fame running back, understood this when he said,

What Dorsett was saying is that, in order to be successful, we must first figure out our “why.” Without knowing the motivation behind what we are doing, we will lose our way.

This stresses the importance of sitting down and answering the toughest questions about life.  This is the reason that I consistently mention the Three Kinder Questions more than anything else on my site.

Once you’ve outlined the goals and the reason behind them, we can hold onto that motivation and use it to fuel our drive to accomplish our goals.

Take Home: How to Be Better with Money

In this post of quotes, I want to end with one by a prior president. Teddy Roosevelt had something to say about the man in the arena doing his best to fight the good fight.

“It is not the critic who counts; not the man who points out how the strong man stumbles, or where the doer of deeds could have done them better. The credit belongs to the man who is actually in the arena, whose face is marred by dust and sweat and blood; who strives valiantly; who errs, who comes short again and again… who at the best knows in the end the triumph of high achievement, and who at the worst, if he fails, at least fails while daring greatly, so that his place shall never be with those cold and timid souls who neither know victory nor defeat.”

Whether we are trying to win at football, basketball, soccer, golf, or….personal finance and life; the keys to success will often be the same.

Know yourself, stick to the plan, and have some discipline.  Figure out the 20% of personal finance you need to know to get 80% of the results.  Then, be smart and do your best.  Don’t be that poor timid soul who knew neither victory nor defeat.

Do you have examples or stories where sports have taught you important life lessons?  What are your thoughts about the lessons I’ve learned?  Leave a comment below.