Financial Mistakes: It (mis)takes one to know one!

I have given up on my personal social media accounts.  Though, you can find me on twitter – @physphilosopher or on the Physician Philosophers Facebook Group for physicians, I am sick of personal social media.  The biggest reason is that I am tired of people pretending to have these “put together” lives.  Life can be ugly, messy, and altogether broken.  So, I decided to stop propagating the social media “all is well” machine.

I think that the same problem exists in the personal finance blogging community sometimes.  Post after post of people knowing how to “do it right.”

While I love the advice I get from each and every post (and I love the personal finance blogging community, too), it can get old seeing people who seem to have it all figured out.  We can’t all be experts…so I’ll settle for the fellow-man-on-the-journey role.

Given my lack of perfection, this post is going to be exactly the opposite of all that put together nonsense.  We are going to discuss five financial mistakes that I have made in my life and the consequences of each mistake.  I want you to read this in a certain light, though.

The light is this: You, too, can make it to financial independence despite making stupid mistakes like me.

1) How the GI Bill should NOT be used

My dad was a Navy guy.  Unfortunately, while he was in the Navy, he was shot during a hunting accident and has been disabled since before I was born.  The bullet hit his spine.  Miraculously, he can still walk, but he has neurological damage that has led to atrophied legs below the knees.

He also has the most legit chronic regional pain syndrome (CRPS) I’ve ever seen: atrophied shiny/atrophic skin, hairless legs, hyperalgesia, paresthesias, burning sensations.  You name it, he has it.  I’ve never heard the man complain, though.

There were a lot terrible things that came out of my dad being shot, but one good thing that came out of it was the GI Bill.  As his dependent, I was allowed to take part in the GI Bill.  I also had a full academic scholarship in undergrad.  So, this meant that every month I was given a check to spend or save however I wanted.  It was cash in my pocket.

If my memory serves me correctly, the check was for more than $800 each month.

Every single dollar, quarter, nickle, and dime was spent on stuff.  I spent it on late night runs to taco bell (cheesy gordito crunch for the win!).  It was spent on poker nights (that I usually lost).  I spent it on gas for my car, going to the movies, buying video games (a habit I am still yet to kick), and my friends.

Now, not all of these things are bad (except taco bell; that probably is bad).  That said, I could have been a lot further along my financial independence path if I had saved that money.  But, guess what, I can’t turn back the clock.  Opportunity lost.

2) I used to suck at pretend budgeting

When I was a fourth year medical student (and still knew nothing about personal finance) I had a rough idea about how much money we spent each month.

My wife had previously stopped working because we had our first kid at the beginning of fourth year. And guess what?  We wouldn’t get paid in my intern year until the very end of my first month in July.

With this mistake, my grandmother fortunately stepped in and saved the day.  She had a CD maturing for exactly $5,000 and said she would give us the money interest free. All we had to do was pay her back at $50 per month during residency and the rest when I finished.  Thankfully, I didn’t have to put this on a credit card.

3) Not sure if you’ve noticed, but I currently finance a car.

Yep.  You heard that right.  Someone who owns and runs a personal finance website that discusses money matters for doctors who spend too much…finances a car.  As I often say, “You can’t fix stupid (although with anesthesia you can sedate it!)”

I’ve written about my intentional spending philosophy multiple times.  I’ve even mentioned the car I am financing.  I try to be transparent, and one of the biggest reasons why is that I want people to see that you can live your life and achieve your financial goals.

It is all about balance.  And, as long as you have sat down and intentionally designed your financial goals, I can get behind just about any purchase.

You can get to your goals even if you are making some less than optimal decisions…like financing a car.  My car brings me great happiness despite being a “thing.”  It was the one of the two bumps I took in lifestyle when I finished training.

Don’t put words in my mouth, though. You shouldn’t go buy the house, and the car, and put the kids in private school, and live in a high cost of living area …. If you do this, you won’t achieve your financial goals early in your career. Or maybe ever.

It’s just not going to happen. But you can make one or two (lesser) mistakes called “living life.”  Trust me… it’ll be okay.

4) What do you mean investing while you are going into debt at 7% interest is bad? 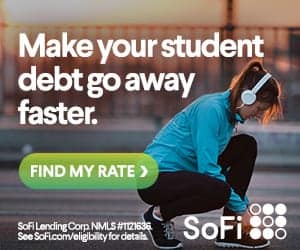 Speaking of debt, you should make a plan to get rid of yours.

When I was in my first and second year of medical school I stayed a couple of times with some friends who were “good with money.”  They encouraged me to get into the stock market and to invest.

The only problem was that I was accruing 6.8% interest on all of my student loans, which would end up totaling $100,000 at the end of medical school and balloon to $150,000 by the end of fellowship five years later.  This doesn’t include the extra $40,000 my wife had from grad school.

Let’s be blunt about this.  Investing while you have that kind of interest on your debt is stupid.    What I should have been doing is limiting my debt during medical school.

Apparently, I lacked both common sense and time.  Or maybe I lacked the math skills.  Either way, this was a fundamental mistake.

I ended up selling all of this via short term capital gains taxes (i.e. regular income tax).  If I had held it for a year I could have at least sold the gains at the long-term capital gains tax rate.  Oh, and when I did sell it, I am pretty sure I used it to take a vacation…. instead of putting the money towards my debt.

5) I didn’t save a dime in residency.

You read that right. I didn’t save a dime in residency. Unfortunately, no one taught me why that it was important to invest money in residency (or that it could be done).

It’s one of the biggest reasons I created this website: To teach those coming behind me the topics that our medical schools and residencies have been historically too afraid to teach.  It is time for attending academic physicians to step up to the plate.

The point of all of this is to simply say that despite all of my mistakes (and these are just five of them, I have many more), I am well on my way to achieving all of my financial goals.

I hope that this post makes you wise up, but also helps you realize that if you have made some financial mistakes, it is not the end of the world!  You’re likely gonna make it.

Share some funny (or not so funny) financial mistakes you have made along the way. Are you still going to make your goals?  How much did it cost you? What would you tell yourself if you could go back in time?