Imagine going to help a community in a 3rd world country.  Imagine that this place has a difficult time maintaining it’s electricity, and that it constantly shuts off while you are there.  Further imagine that after you found this need for more consistent electricity, you spent months fundraising to buy a generator and threw an awesome party celebrating when the generator finally arrived.  Would it surprise you to know that this same team returned five years later to find the generator covered in overgrown weeds and grass and was now more often used as part of the things the kids play with for fun?  This is when helping hurts.  Helping can hurt medical mission work, too.

There were several problems that led to this unfortunate incident. The first is that no one thought through the process or the true needs of the community.  A generator wasn’t really what the community needed.  Maybe losing electricity was a common occurrence for them and something that didn’t bother them at all.  The problem that outsiders visiting the community observed was not a problem at all.  Solutions from outside groups are rarely helpful if no one attempts to gain the input of the community itself.  The second mistake was that no one thought about the ongoing needs of the people once they had their major success.  Unfortunately, generators do not run on sunshine and happiness.  This one, like many, ran on gasoline…which the community didn’t have.

What about the time when Westerners sent free clothes to an eastern African country in need and screwed up the economy?  You know, supply and demand?  The idea was generous, but it led to the local manufacturers of clothing to be put out of business.  It’s hard to compete with “free clothing.”  People lost jobs. Did this help the community or was this when helping hurts?

This mistake of performing mission work while not thinking of the needs and culture of the community is what I want to talk about today.  A great read on this topic is the book When Helping Hurts, which discusses people trying to help those in poverty and how (if not done in a thoughtful manner) can actually hurt the people we are trying to help.

What’s the Purpose of Mission Work?

I became a Christian during my junior year of high school.  At the time, I thought I should become a pastor until one of my professors during my freshman year of college taught me that you can help others experience sacrificial love in any profession.  You just have to be thoughtful.  I then transitioned my thoughts to becoming a doctor as I had already completed my nursing assistant prerequisites in high school and enjoyed working with patients.  This is when it dawned on me that maybe my calling wasn’t to the pulpit, but to the mission field where I could help those in need via a useful life-saving skill set.

I don’t mean to make this a religious post, but to explain how I got to the point in my life where mission work became my goal.  All I wanted to do was help people.  So, my junior year in college I went on a (non-medical) mission trip to help construct buildings for orphan “street-boys” in Puerto Alegria, Peru.  We took a flight to Lima,  took a smaller plane to Iquitos, boated up a tributary of the Amazon from Iquitos, and eventually found the place where we were to help.

I enjoyed my time there getting to know the boys (and seeing a sloth and Fer De Lance) who were often abandoned on the street to become addicted to drugs or to become criminals (think real world Alladin: Stealing bread to live).  It didn’t strike me until later how expensive it was to send a team that large down there and how far the money we spent could have gone in a village like that.

Instead of spending that money to get there, we could have spent that money to hire two local carpenters who needed food on the table more badly than we did.  This would also have helped grow their economy and provide the same help constructing buildings.

This is when it dawned on me that a lot of mission work, particularly short-term mission work, is really meant to benefit those that are going to serve.  It makes them feel better about themselves.  They get to experience real poverty and be thankful that is not the reality for their family and them.  The problem with this kind of mission work is that it is often wasteful and unhelpful to the community being “served.”

The purpose of mission work should be to truly help those in need in a way that is meaningful to them.  Not to the people going there to help.

This brings us to the topic today. [Longest introduction ever, right?]  How helpful is short term medical mission work? 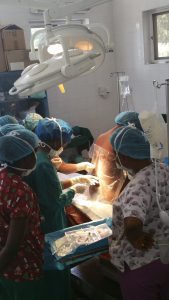 My CA-3 (PGY-4) year of residency I went to Ghana where we helped train students on how to perform anesthesia.

The answer is complicated.  It depends on a lot of things. Here are some small examples:

So, I encourage you to perform some introspection and to determine why you are going on that mission trip?  Is it for you?  Is it for them?  What good will it do?  Will it cause harm?  How do you know?

We have met the enemy and he is us. ~ Walt Kelly

Be a part of the solution.  Not a part of the problem.  Be intentional about your short-term mission work if you choose to go on it.  Make sure you aren’t the one becoming the next chapter in When Helping Hurts.

What do you think?  Is short term mission work helpful? Is it better than nothing? What are your thoughts? Leave a comment.