Have you ever thought about living in a high cost of living area as a physician?  If so, this post is going to be right up your alley.  Unlike most professions, doctors make less by living in more highly desirable locations.  That comes with a cost.

If you’ve ever considered the increased cost of housing or the need to put children in private school, then this post, which was originally published on The White Coat Investor, is for you.

A two-physician family in their upper thirties living in an expensive part of California earns about $550K per year.  They have excellent financial habits, maxing out both retirement accounts and 529 accounts for their two pre-school-aged children, as well as having built a sizable taxable account of approximately $600K.  They have a generous emergency fund of approximately 12 months worth of expenses and their mortgage payment including property taxes is only $3500 per month, or approximately 8% of their income.

Their children will soon be entering kindergarten and they, unfortunately, live in a notoriously poor school district.  Should they pay $36,000 per year per child for private school tuition or should they move to a nicer, more expensive house (estimated at $1.6-2.4M) in a better public school system?  What if they had another child?

This question was sent in by a regular reader on behalf of a partner but illustrates a common dilemma for physicians and other well-to-do families.  At first, when I read the email I thought, “Well that’s a first-world problem if I ever heard one,” but in reality, it’s a California (and Manhattan, and other expensive cost of living areas) problem.

Now, before I go any further, I need to preface this by saying to all the Californians out there that I really do get it.  I spent a month as a med student living in Northern California and a month as a resident living in Southern California.  California has incredible weather, lots of fun cities, and an irresistible combination for outdoors lovers of both incredible beaches and incredible mountains.  Some of the best weeks of my life have been spent climbing in the Yosemite Valley.  However, California is a rather toxic place for a physician to live.

California and the Physician Wasteland

On the blog, we have two posts arguing about whether physicians were rich or middle class.  This is worth arguing about for doctors in many parts of the country, but in the Bay Area, doctors are decidedly middle class.  High cost of living areas are usually coupled with higher salaries, but for California physicians, this is not the case. 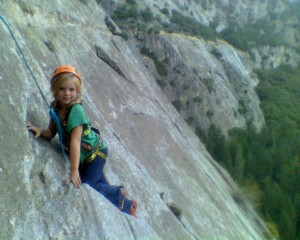 My daughter 400 feet up a wall in Yosemite

The pay is pretty similar to that in other parts of the country, and in some specialties even lower due to very low MediCal reimbursement and a high percentage of self-pay patients.  This is coupled with the high cost of living, high state tax rates (combined with a highly progressive state tax structure), and in some areas such as LA, high malpractice premiums.

California often leads the nation in many trends, and I wouldn’t be surprised to see California lead the way in future physician shortages as doctors flee the smog, traffic, and toxic work environment for Nevada, Utah, Arizona, or Texas.

So, my first answer to the question above is that the choices are not necessarily limited to big house vs private school tuition.  You can always go practice in Texas or Indiana or a myriad of other physician-friendly states where your take-home salary will be decidedly higher, and relatively much higher as you won’t be competing with .com millionaires for housing and schools, thus making your cost of living much lower.  I was surprised to see private school tuition so high as there are very nice private schools available in my city for around $10K per year, but I suppose in California that anything is possible.

Before shelling out $36K a year for tuition, let’s consider the opportunity cost.  If you invested $36K a year at 5% real for 13 years from age 5 to age 18, and then let it ride until the child turned 65, the child would have $6.3M in today’s dollars to retire on.  That would provide a pretty awesome retirement, even in California, without the child ever having to save ANYTHING for retirement.  Even if you just wanted to give the kid a head start in life, you could just give her the $637K upon graduation from high school.

This is no small investment.

The couple making this decision first ought to consider whether they can afford EITHER option.

My rule of thumb for housing expenses is 20% of gross income should cover interest, principal, taxes, insurance, and utilities.  This couple is currently living well under that, but a $1.6M 30-year mortgage ($2M house) and a 1.2% property tax rate would run approximately $9600 a month.  Add on some utilities and insurance to get to about $10,500, and you’re looking at 23%. It’s a little high by my rule of thumb, but by the usual standards in California, still pretty affordable, especially considering much of the mortgage interest and property tax is deductible at an extremely high marginal rate.

This couple has enough to make the downpayment and should be able to afford the payments.  My other rule of thumb is that the size of the mortgage should be no more than 2X the gross income.  A $2M house ($1.6M mortgage) is a little high at 3X, but still, by California standards, not too bad, and they could make a bigger downpayment if they wanted to lower it further.  Certainly, with more disposable income and high marginal tax rates, the rule of thumb can be stretched a little.

Given their very low cost of living, they can probably also afford the $72,000 per year for private school tuition assuming they stay in their current house.  Since less than 10% of their income goes to housing now, they should be able to save 20% for retirement, pay 35% in taxes, pay 13% in tuition, and live off 22% ($121K, or $10-11K per month) of their income, assuming their earnings stay the same.  They’d certainly be trading more wealth, fancier vacations, a nicer house, or earlier retirement for the private school education, but what better to spend your money on than your children?

It appears that both options are affordable for this couple, although adding a 3rd or even a 4th child would probably rule out the private school option.

The Case For The Bigger House

It’s easy to make the case for the bigger house.  A large percentage of the payments would be tax-deductible at a very high marginal rate.  The asset is likely to appreciate, and when all is said and done, they’ll own a very valuable asset that can always be traded for a cheaper house in California or elsewhere in retirement.  In a way, their payments are part consumption and part investment.  Plus, you get to live in a bigger, nicer house in a safer, nicer neighborhood.  Why should you have to live in a dump when you make a half million a year?  Home equity is pretty exposed to creditors in California (homestead exemption is only $100K for a couple) but so is a taxable account.I’m also a big fan of supporting good public schools because it not only benefits my children but also society as a whole.  Aside from a few years at an inexpensive private college, the other 20 years of my education were all at quality public institutions, and I turned out just fine.

Most people who purchase private schools believe their children are getting a better education there than in the surrounding public schools, although that is not necessarily the case.  For better or for worse, private school students, especially at a school costing $36K a year, are only going to interact with rich kids and are going to want to keep up with them.

There is also the benefit of not having a large fixed expense like a mortgage.  If one doctor stops working, or their salaries decrease substantially, they can always stop sending the kids to the private school, so this option is perhaps a bit more flexible than buying another house.

They also get to avoid the transaction costs which are not insubstantial on California-priced real estate.  The $400K they would otherwise use for the downpayment can also be profitably invested elsewhere.  In 15 years at 5% real, that would be worth $832K.  The property tax may also not be deductible if caught by the AMT as some docs in a high tax state like California are.

The first thing to consider is whether or not they’re willing to leave California.  If they are, that’s what I would do.  But I understand most Californians feel much more strongly about living in California than most non-Californians. So if I really felt I had to stay in California for family or lifestyle reasons, then I would move to the more expensive house.  Housing costs would go up approximately $84K per year, but a good chunk of that is paying down principal and purchasing an appreciating asset, whereas all of the $72K per year in tuition payments would be consumed, and they would also get the benefit of living in a bigger, nicer house in a nicer neighborhood. It would become an even better deal to buy a new house if private school tuition goes up or if they have more children.

In the end, you have to spend your money on what you value.  You can buy a big house, private school education, a new boat or even plastic or laser eye surgery.