Leif over at Physician on FIRE doesn’t just talk about retiring early. The man has done it.  He is a living, breathing example of what FIRE actually looks like.  Though, as you’ll find out below, Leif doesn’t view retirement as a job. He plans to be doing many other things with his time going forward.  He may be “retired” but isn’t what he will be doing for a living.

For example, he is gonna keep rockin’ it over at the Physician on FIRE where the post below was originally written.

Now that my quote-unquote “retirement” has arrived — I left my job as an anesthesiologist in August of 2019 — I’ve been thinking more about what my life will look like after that. I don’t think “retired” will be a great word to describe my existence as a husband, father, blogger, and traveler.

I’ll be retired not retired.

What do I mean by that? It’s kind of like when someone makes a phony public apology, a tactic known as saying “sorry not sorry.” It goes something like this.

“I am sorry that you were offended when I referred to you as a no-talent a**clown. While your music makes me physically ill, I respect the fact that you’ve won Grammys and finally got a tasteful but long-overdue haircut. Please accept my sincere apology.”

You want to say you’re sorry, but you’re not really sorry.

In 2018 attended FinCon — the conference where media and money meet. I was part of a panel moderated by (name drop alert) The Today Show’s Jean Chatzky, discussing withdrawal strategies in early retirement. One point she made, that we all agreed upon, was the fact that retirement needs to be redefined.

I love the word “retire” as a verb. I plan to retire from medicine. My Dad retired from his dental career after the markets recovered from the Great Recession. At some point, most of us will retire and start doing something different with our time.

I’m not a big fan “retired” as an adjective or “retirement” as a noun. People tend to get hung up on what a person can or can’t do in retirement and still say they’re retired after they retire (for perhaps the first of several times).

If you ask me what my Dad does, I would not say “oh, he’s retired.” That doesn’t do his busy life justice. He designs things and builds them. He makes gallons upon gallons of maple syrup every spring. He hunts, fishes, travels to far-flung places with my Mom — they went to Uzbekistan and Turkmenistan last year — and sometimes has the distinct pleasure of caring for two rambunctious grandchildren.

Now, I’m not trying to argue that he’s not retired — the dictionary tells us that retired people no longer work for money. For the most part, that’s true of my Dad and many other people who have retired.

Or is it? He does still work. In the last few months, he built a sturdy new deer stand, poured a concrete floor in the sugar shack, helped a neighbor build a shed, and fried fish for a few dozen friends, among other things.

He also still earns income. His 401(k) and taxable account pay dividends. He’s receiving annual income from the sale of his dental practice. He receives checks from Uncle Sam related to his military service in Vietnam and from the Social Security department.

So he did retire, and he now does different work and earns money in a variety of ways. I’m not saying “retired” is an inaccurate description of his status; I just like to think of it as something he did rather than something that he is.

At this recent conference, at which Tanja from Our Next Life won a well-deserved Blog of the Year Plutus Award (and yes, that heading above is a nod to her excellent FIRE blog), I learned many ways I can grow this site’s readership, influence, and income, furthering my charitable mission. I also learned it’s best not to have run-on sentences in your blog posts. Clearly, I’m a slow learner.

Now, I ‘ve got all these ideas and I want to do all the things, but I realize I won’t have time to implement many of them until after I retire from medicine. I’m not sure I’ll have time then, either, as I’d like to shift most of my blog work away from the nights and weekends to focus more on family as the wise J. Money has done.

I don’t know exactly what my next life will look like. I’ve uttered “We’ll take it one year at a time” more times than I can possibly count.

I plan to be a more present father. We plan to travel as a family for months at a time. We’d like to be Airbnb hosts. I will continue my attempts to educate, enlighten, and entertain a growing readership. I’ll still be attending, and perhaps even organizing get-togethers with like-minded people. Events like Camp FI and FinCon are just awesome.

Doing this the way I do this looks, and sometimes feels, a lot like work. It’s fun work and I love doing it, but I do have self-imposed deadlines, am active on social media (Instagram, Twitter, and Facebook) and I’m constantly communicating with people from all around the nation and world through all these different channels. It’s work I choose, but I’d be lying if I said it never feels like work. 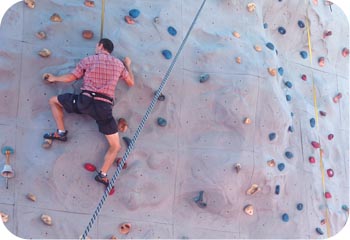 climbing fake rock walls feels a lot like work, too

I was stoked that ( second name drop alert) the blogger, philanthropist, and world saver Mr. Money Mustache agreed to join our FIRE panel (Thank you, Pete!) and it was also great to see him talk on a bigger stage in a Keynote talk. In that discussion, he referred to himself several times as a retired person.

If you ask him what he does, he doesn’t simply say “I’m retired.” He says something like this: I’m a retired person who likes to do physical labor for a few hours in the morning, spend a little time on my computer in the afternoon, get some exercise in, mess around with musical instruments, and spend the evening relaxing with family and friends, and perhaps a beer or two.

One of his more popular blog posts lambastes the infamous “Internet Retirement Police,” a collective of naysayers who are quick to point out that anyone who does something productive with their time, particularly if that something earns them money, absolutely positively cannot be retired or use that word.

I think it’s a great post, and I agree with the sentiment that individuals should be able to decide for themselves whether or not they’ve retired and how they define their status.

The fact that the post had to be written does identify an issue with our messaging, though. While many of us in the financial independence community have retired or will soon retire from our careers to do something different, there will always be people who see a busy blogger, podcaster, author, or influencer as something other than retired.

While they don’t have to be rude about it, as they often are, I do see the point they’re making. I am a fan of transparency and I don’t want people who discover the FIRE movement to get the wrong impression that early retirement only works if you have a monetized life after retiring.

The fact is that those of us that are making some money after reaching financial independence are earning dollars we don’t actually need to live our lives the way we want.

Unfortunately, that fact is often lost on those who are first exposed to the FIRE movement by a feature article in the mainstream media. It’s easier to dismiss the idea of a very early retirement as implausible than it is to take a deep dive into a blog or podcast to discover just how it can be done, with or without future work or active income.

On a related note, the Academy recently graduated a fresh new batch of recruits for the IRP. Beware!

If the naysayers were to dive into the deep end, they’d find out that Mr. Money Mustache donates lots of money, I give away half of my blog profits (and greedily keep the other half, but that drives me to work harder #human_nature), and this community is full of people who have moved beyond a scarcity mindset to one of abundance. If we’re making money somehow, it’s by choice and not out of necessity.

The Verdict: Retired Not Retired

It doesn’t actually make any difference to me whether or not people use the word retired as a noun, verb, or adjective, or not at all. If you’re working 60 to 80 hours a week, earning six-figures, and telling everyone you’re simply retired without qualifying that statement, I would take issue. Honestly, I don’t know people doing that, but I think that’s the impression some people get. Hence, the backlash and rude comments.

The issue isn’t really with the word itself, but with how it’s used and understood differently by different people. As Jean Chatzky said, we, as a society, should be thinking about retirement in a new way that embraces all sorts of different activities, even some paid work. In spite of what the tee shirt says, retirement isn’t just a beach.

Mr. 1500 is on record saying he hates the word “retirement.” Yet, he’ll say he retired because it’s the best word we’ve got. I like it more as an action than a state of being. Retire may be something you have done, but it does not define what you do now.

Each of us is free to decide which words to use to describe who we are, what we do, and what stage of life we’re in. To be told you”re wrong when there are so many shades of gray — more than fifty, I’ll bet — is just silly.

Personally, I haven’t yet figured out how to best answer the “so, what do you do?” question, but I don’t think “retired” will find any place in my one-line response. It’s become too loaded a word.

I’ll start with something like “I’m a personal finance blogger.” If that leads to further questioning, which I suspect it usually will, I may mention that I retired from an anesthesia career and now do this other thing, but I won’t lead with “I’m retired.”

To those of you who have retired from your career job, how do you respond to “what do you do”? Bloggers and podcasters who have plans to FIRE, how will you approach that question? Will you use the word “retired”?