Should I go to medical school?

The cost of medical education

While any high-income earner can build wealth if they go about it the right way, not every physician obtains this.  In fact, many do not.  It is a common assumption that doctors are “rich,” but those making these assumptions often do not know the whole story.  We start with what feels like insurmountable debt:

The median cost of a private medical education is more than $314,000.

When I finished training, the interest rate for graduate student loans was 6.8%.  Let me say that $300,000 accumulating at 6.8% interest can be devastating. Particularly if one has chosen a lesser earning field in medicine (family medicine, pediatrics, general internist, etc).

Should I go to medical school?

A recent study published in the AMC journal of Academic Medicine looked into the cost of medical school.  It compared various ways of paying for the cost (Public Service Loan Forgiveness, Military scholarships, self-paid, federally guaranteed loans, etc). It further separated the study into four different fields of medicine with wide ranging income levels.  The four fields that they chose were general internal medicine (assumed income ~$175,000),  Opthalmology (~$215,000), general surgery (~$300,000), and orthopedic surgery (~$409,000). Through this study, utilizing what is called Net Present Value (NPV) analysis, they determined at what point people who took on $180,000 in loans started to catch up to (and pass) students who took on a national service scholarship. For those that entered a high paying specialty ($300-400,000), this took between 4 and 11 years.  For those that entered into primary care…it never happened.  You read that right. This is where the question of “Should I go to medical school” becomes difficult to answer financially.  It really does depend on how much debt you have and what specialty you are able to (or decide to) go into. Choosing a specialty is somewhat self-determined if you are a competitive applicant; other less competitive applicants who are limited by USMLE scores, poor letters, or poor academic performance in medical school do not necessarily have a variety of choices to choose from.

Does it make more sense to go into another field?

Utilizing the similar NPV method mentioned above, another study (or actually, a commentary) published in the same journal looked into whether people would be better off going into an alternative field rather than going into medicine. From that study comes the following table comparing two different careers: 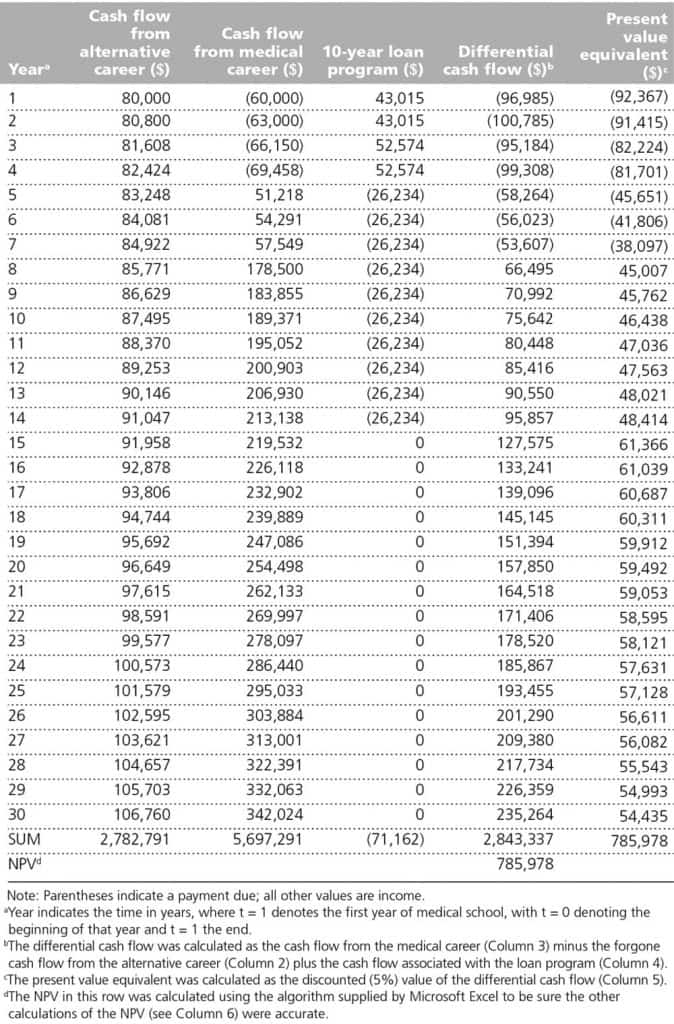 With those given assumptions, the person who chooses the medical profession route would end up being up $785,000 compared to the “alternative” profession. Are these assumptions good though?  Not really.  Very few people pay back debt during residency if we are honest.  Additionally, most of us, refinance our loans after finishing training.  The example above does not follow the typical example. However, it still gives you an idea of whether it is “worth it” financially.  Moreover, if you choose an even higher paying specialty (ortho, anesthesia, surgery, etc) AND you refinance, then there will be an even more impressive difference in choosing a non-medical life and the life of a high-earning physician.

What does this mean?

This means that if you can find a non-medical job providing more than the income listed above or if you are going to choose a low-earning medical specialty (pediatrics, family medicine, etc), it may not make financial sense to become a physician.

However, if you have a way to minimize your debt (self-paid, family paid, scholarship, military) or you are going into a high-earning specialty (>$250,000) then the decision to pursue medicine makes plenty of financial sense.

There are, of course, many other parts to this decision. Potentially delaying your life while in medical school. The psychosocial aspect of going into medicine.  The presumption by everyone that you are loaded when you are really paying off boat loads of debt. Financially, though, the above line of reasoning probably holds.

People often ask, “Should I go to medical school?” What do you think?  Is going into medicine a financially wise decision?  Or would you recommend someone choose a different path?