I received this in my email box a few months ago from a fan of actively managed investments and stock-picking. Question. While I think you are right that most people should be in index funds, you are not helping people who have bad 401 k plans where the index funds charge really high fees or are not existent. You should have some advice on how to pick an actively managed fund as well. Most people go for the funds with the highest stars and that is a big mistake. Essentially, even if you believe active management is a waste of time, for some people that is the only option and you are doing them a disservice. Answer. Essentially this reader is asking what to do with a crummy 401(k), not how best to pick an actively managed fund. Many people get excited when they first start learning about smart mutual fund investing, and then go take a look at their employer-sponsored plans where the excitement rapidly wears off as they realize that not only does the 401(k) plan have high fees, but it is filled with high expense ratio actively managed funds. Although I have never had what I would call a crummy 401(k), I have also never received a match from any employer. Every dollar in my retirement accounts is a dollar I elected not to spend, a dollar that would have went to pay taxes, or a dollar that those dollars earned. At any rate, here’s what you should do with a crummy 401(k).

#1 Look At The Retirement Plan Before You Take The Job

#2 Realize That Most 401(k)s Are Very Temporary

You may not have your money in a 401(k) or similar plan for very long at all. Employers change plans and employees change employers. Some plans even allow you to take money out of the plan without leaving the job. In one extreme circumstance, I have even seen a situation where a couple put the money into a 401(k), then borrowed it back out to invest it elsewhere. At any rate, when the plan closes or you leave the job, you can move the money elsewhere. 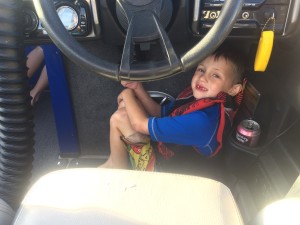 Jonas thinks the heater is the best part of the boat

In the past, the most common option was to move it to a traditional IRA where you could control the fees and investments. That may not be the best idea given the need to use Backdoor Roth IRAs, but you can always move it to a 401(k) from a previous job that you kept (good reason not to rush out of it until you have something better to roll money into), your new job’s 401(k), or ideally, an individual 401(k). Remember, if you ever have $1 of self-employment income, you can open an individual 401(k) that you never have to close. You can eventually roll all of your employers’ 401(k) money into it.

Many physicians have had success in actually lobbying their employers to get a better401(k). The smaller your employer, the more likely your efforts are to have some effect. In small practices, your employer may be investing his money right alongside yours and simply doesn’t realize how bad his 401(k) design is. Showing him how much money his decisions will cost him, in the long run, can be very motivating. Pointing out that a 401(k) full of actively managed funds could get him in legal trouble for neglecting his fiduciary duty may also provide motivation.

#4 Be Sure To Get The Match

It is possible that you will be better off in a taxable account than a really, really bad 401(k). But that requires you to be in the 401(k) for decades, especially if there is a match. The shorter the time period, the less effect the expenses of the bad 401(k) will have on your accumulation. If the total expenses in the 401(k) are 2% per year or less, it is almost surely worth using, and it is rare for a 401(k) to be that bad. At any rate, even if it is, be sure to put in enough to get the match. That’s basically part of your salary.

Even if you have a bad 401(k), and you’re stuck with it, and you may be stuck with it for a long time, take some consolation in the fact that it is unlikely that all of your retirement money is in that plan. You likely have some in your spouse’s plan, Backdoor Roth IRAs, and a taxable account. The concept is to take the least bad part of the 401(k), and build your portfolio around it using the other accounts. This is also a great reason to start Roth IRAs in residency. The larger they are as a percentage of your portfolio, the less a bad 401(k) matters.

Nearly every 401(k) line-up I have looked at in the last few years at least had a single index fund, usually of the S&P 500 variety. Often the expense ratio was higher than you would like (0.5-1% per year) but at least it was an option and in that sort of a plan, it is usually still the lowest cost fund in the plan. If you have a reasonably good index fund in your plan, use that and build around it with your Roth IRAs and taxable account. More likely, when you look closely, your 401(k) probably has acceptable funds for 2-5 asset classes. If you’re lucky, like in the two employer 401(k)s I’ve had in my life, it is composed entirely or almost entirely of low cost index funds. Remember to look at your entire retirement nest egg as one big portfolio.

#7 Look For a Brokerage Option

My partnership’s 401(k) has a nice line-up of low-cost funds. However, it also gives us the option (called PCRA at Schwab) to go to a brokerage window and buy anything available at the brokerage such as low-cost Vanguard ETFs. See if something like that is an option for your 401(k). Getting your employer to add that as an option may be much easier than revamping the whole plan. That way, savvy, but whiny, investors like you can be placated while the rest of the plan participants can be herded along to the slaughter by his golfing buddy that sold him the plan.

If you truly are one of the unlucky ones, and your entire 401(k) is composed of actively managed mutual funds, and that isn’t going to change, then remember why index funds are successful. Index funds are broadly diversified, have low turnover, have low expenses, and track the market return. Guess what? Many actively managed mutual funds share some or all of those characteristics. Although perhaps the best strategy for picking a winning (i.e. one that beats its respective index fund) actively managed mutual fund is to choose a manager who concentrates his best bets, your goal should be to avoid picking a losing actively managed mutual fund. If the fund holds hundreds of stocks, has reasonably low expenses and turnover, and has a long track record of more or less doing what the market has done, that’s a reasonable pick. Let me give you an example, such as Vanguard’s Windsor Fund. Let’s compare it to a similar index fund, the Vanguard Value Index Fund. Both funds invest in Large Value Stocks. Both funds have fairly low expenses (0.28% and 0.09%). Both hold lots of stocks (133 versus 322.) And guess what? The returns are pretty darn similar. As of the end of September 2015, YTD returns on Windsor are -7.49% compared to the index fund’s -7.34%. Over the previous ten years, it is 5.97% to 5.92% per year. What do we call that? A closet index fund. What you do not want to do is choose a fund purely based on past performance, especially recent past performance. Nor do you want to choose a fund using the Morningstar star system. In fact, the most reliable predictor of future fund performance is expense ratio.

Consider an investor who has 50% of his money in his 401(k), 25% in his personal and spousal Roth IRAs, and 25% in a taxable account. His desired asset allocation is: The 401(k) has an S&P 500 index fund with an expense ratio of 0.6%, a bond fund with an expense ratio of 1% and a reasonable track record, and a bunch of random actively managed funds with ERs of 1.5%+. So what do you do? Well, here is one option (there are others too, especially if your goal is to keep your bonds mostly in taxable, a different and far more complicated discussion.) This investor has achieved his target asset allocation, while minimizing the effects of his crummy 401(k). Now he just needs to get some moonlighting (1099) income so he can open an individual 401(k) and get that money out of the lousy 401(k) as soon as feasible. What do you think? Do you have a lousy 401(k)? What have you done to minimize the damage? Knowing what you know now, would you take a job with a lousy 401(k)?